Editor-in-Chief Pax Tandon sat down to talk to Dr. Fay Tang, President and Founder of the Tang Foundation and creator of the first-ever TANG Prize for Achievements in Psychology, on November 21, 2014. 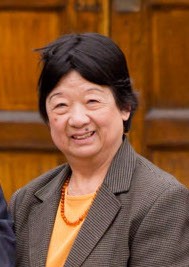 Notoriously private, Dr. Fay Tang has rarely engaged with the media.  So when she agreed to open her heart, her legacy, her struggles and her triumphs to me in a recent interview, I knew I was in for a treat.  The interview’s premise was to discuss the big win for Dr. Seligman and Positive Psychology that was receiving the first-ever Tang Prize for Achievements in Psychology, and maybe glean a quote or two from it.  What it ended up being was so much more; a rich tapestry of history, legacy, passion, challenge and triumph.

Dr. Tang greeted me with warm enthusiasm when she answered the telephone. She wasn’t surrounded by the familiar ambient sounds indicative of living in a cell phone era (car horns, airplanes, coffee chop tunes and chatter).  She doesn’t actually own a cell phone, nor does she engage with e-mail (that has made correspondence dependent on actually catching her at home, relics of a time before having someone at your beck-and-cell-phone-call was the norm).  She answered from her home telephone, a good old-fashioned landline with blinking-red answering machine attached.  And all the silence surrounding her as she answered the phone gave me a clear picture of the woman on the other end: a force of austere commitment to service, no frills, minimalist, with a long legacy of charitable giving.  3 generations long to be exact.  She comes from a lineage of charitable giving and community building, a process that began in Southern China and continued in Hong Kong when the family was forced out of their homeland with the installation of Chairman Mao.  Dr. Tang learned early on that if you had the opportunity to help someone, you just did, without expecting anything in return.  We can see this legacy taking shape in her inaugural offering of The Tang Prize, an award worth $100,000.  The Tang Foundation awards the prize to an Internationally renowned scholar whose “record of achievement has left an indelible mark on the field.”  A tall order from a woman of stature.  And the prize this year went to our very own Dr. Martin Seligman for his pioneering work in the field of Positive Psychology.

Why create such a prize? Very simply, because there wasn’t one.  It was in November of 1989 that Dr. Tang ruminated that the gold standard in awards, the Nobel Prize, recognizes excellence in Economics, Physics, even Chemistry, but there is no such prize for Psychology.  This did not sit well with Fay Tang, and as I began to see early on in our conversation, when this willful woman sets her mind to something, it gets done.  This began as early as grade 9 for her, when she realized she wanted to become a Psychologist.  Her mother was adamant about her becoming a medical doctor, but young Fay was repulsed by the idea of exposure to dangerous human afflictions she could potentially contract.  And then she read a book penned by a Chinese author about a mental hospital in Paris called “The Sad Songs of the Mentally Ill” and she realized two things: she wanted to effect positive change on peoples’ psychological experiences, and, she could be a doctor and help her patients simply by talking to them.  Exposure to blood and guts not required.  She excitedly reported the news to her mother, and young Fay was on her way to attaining a Psychological Doctorate and helping the world begin to place as much importance on mental health as physical health, two inseparable pieces of the flourishing equation in her purview.

As a practicing Clinical Psychologist, Dr. Fay Tang now spends much of her time treating patients with a heavy dose of traditional therapy mixed with relaxation-inducing exercises like hypnosis.  They love it so much they ask for her to “relax” them at the start of sessions.  She does this for a generally very reduced rate, if not for free. The same genetic legacy of giving for the sake of giving, without expectation of a return on the investment.

The other portion of her time is devoted to The Tang Award.  To say it was extremely challenging to bring to fruition is an understatement.  In fact, the process has taken the better part of 3 decades.  Years of searching and researching, mountains of legal work, forming a selection committee (in Dr. Tang’s estimation, by far the most challenging part of the process-“Nobel already has these, I am only one Fay Tang!”), and finally landing on the perfect alliance with the Psychology Department at the University of Toronto, whose “support and enthusiasm” under Dr. Susanne Ferber, Chair of the Psychology Department “got the ball rolling so fast” that from May, when Dr. Tang approached the University for an alliance, until now, the awardee was selected and the prize awarded.  In an elegant ceremony, which took place in a wood-paneled room with tall glass windows overlooking the University of Toronto campus, Dr. Seligman received the award in front of a full house, including his lovely wife and daughters.  The date was November 12th, also Dr. Fay Tang’s birthday, the perfect gift for a woman whose vision and passion led directly to the award’s inception.

So what kind of precedent has this inaugural Tang Award set? Timing-wise, the award is to be presented every 3 years.  An almost Olympic-style turnover.  After a careful look at the numbers with her lawyer, this precise woman who describes herself as “thrifty” and very cautious with expenditure decided that the interest collected on chary investments of her own capital would all go to the awardee while keeping foundational capital intact –this will ensure the longevity of the award and support its fruition for years to come.  3 years is the established time it will take to turn over this amount of interest on the investments of personal capital she has spent years amassing.  $100,000 is a number she knows is high enough to attract international attention, and honor her awardees’ efforts commensurately.

As for Fay Tang the person, her erstwhile legacy of silence will perhaps be broken now if she pays heed to advice given to her in a lengthy and enlightening tete-a-tete with her own awardee Marty Seligman when they met in Toronto for the award presentation.  For the sake of Positive Psychology, mental health, and the propagation of the Tang Award, he has encouraged her to engage more actively with public relations and media outlets.  Though I hope this doesn’t diminish the privacy that she holds so dear, I consider myself lucky to be one of the first to hear her story and privileged to be able to share it.